Bonus evidence are items found in missions that can be recorded with the smartphone. 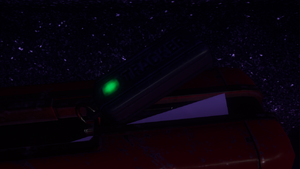 The tracker on a briefcase.

Bonus evidence exists throughout Redacre and the Maze. They consist of objects TBC members can record to further prove all the weird things happening in Redacre. These objects are typically red in color and are sometimes hidden out of sight. The number of bonus evidence items in a mission will vary. For each bonus evidence item collected, players will receive an additional 15XP at the completion of the mission (before the Team Multiplier). Bonus evidence items are usually related to CHORUS in some way.

Journals are awarded randomly but are more likely to be awarded if the player collects a lot of Bonus Evidence.[1]

There are 217 locations reported on the Wiki for Bonus Evidence spawns across Redacre and the Maze.

For a list of Bonus Evidence locations sorted by location, see: