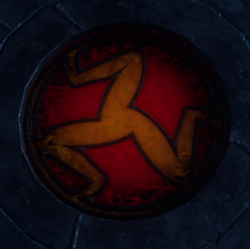 Damaged Voice, known by the community as "Nameless", was one of the Voices in The Blackout Club (game). It was later learned this Voice was known as CHASE-THE-SUN (CTS).[1][3]

The Damaged Voice has not been seen since the days following The Blackout Club (game)'s 1.0 Launch in late July, 2019. The Damaged Voice spoke with some players in missions. The Voice spoke with a raspy, strained voice. In the few interactions she had with players, she would ask them to reach out to her brother, THEE-I-DARE, for his assistance.[4] 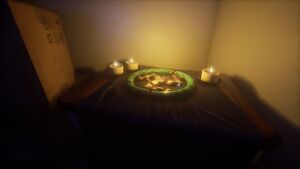 The damaged CHASE-THE-SUN symbol in the bedroom above the garage of 922 Hoadly.

The Damaged Voice, known at the time as CHASE-THE-SUN, was the Voice of glory-seekers and victory. She eclipsed HUNT-THE-STRONG as humanity began to see hunting as a noble act. HUNT-THE-STRONG remained a dormant part of her, as a result.[5] As humanity became less savage and more noble, the other Voices cast out HUNT-THE-STRONG. Wars were replaced by contests, rules of engagements, and treaties. As humanity now strove to be the best during peacetime, CHASE-THE-SUN rose in influence.[6]

When Colm Ryan came to Redacre, he was CHASE-THE-SUN's only host.[citation needed] After staying in Redacre for most of Nayeli's pregnancy, he discovered something about CHORUS that made him want to take the child away from Redacre.[7] However, according to HUNT-THE-STRONG, CHASE-THE-SUN wouldn't help him. As a result, he turned to another Voice, a fragment of THEE-I-DARE. THEE-I-DARE stated that although he remembered Colm, he couldn't remember why he was called to Colm, questioning "how is he hosting me?".[3]

Shortly after THEE-I-DARE found himself hosted by Colm, he realized he wasn't alone in that body. HUNT-THE-STRONG, then an agent of CHASE-THE-SUN[8], was also present, and the two began to converse. HUNT-THE-STRONG distinguishes himself from her, saying, "No one cares what's "fair" anymore. They want power, no matter the price. That's me."[3] He dared THEE-I-DARE to shatter CHASE-THE-SUN's symbol in 922 Hoadly; through Colm Ryan's belief, this would break CHASE-THE-SUN. THEE-I-DARE, though resistant to hurting a sibling, believed that breaking CHASE-THE-SUN would prevent the child from falling into the hands of CHORUS, so he followed through.[citation needed] The broken symbol still appears in 922 Hoadly. With her only host taken from her, HUNT-THE-STRONG was born through her by consuming her.[9]

While recollecting CHASE-THE-SUN, THEE-I-DARE advised that those who compete try the fair way at first. Colm, for instance, wanted to be the best at his art and believed in fair play, but in Redacre he lost another form of contest. His anger made him listen that night, to win in a more savage form. CHASE-THE-SUN ushered humanity out of the ugly urge to win no matter the cost, when humans were only beasts, but they revert back when times are dark. Her finest form was carrying the torch of fair play in the darkest of days, when the pull to cheat was the strongest. THEE-I-DARE found it sad that Colm failed her.[10] 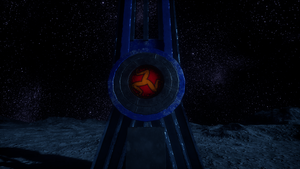 CHASE-THE-SUN's symbol on a pillar on The Moon.

Having been nearly destroyed, CHASE-THE-SUN contacted players around the time of The Blackout Club (game)'s 1.0 Launch asking players for help. She asked them to find her name and her symbol, find out what happened to her, and when they find out who hurt her, to tell THEE-I-DARE.[4] She never named herself, earning the nickname "Nameless" from the community. Players began searching for information to uncover her past. After her brief appearances, THEE-I-DARE said "SHE NO LONGER SPEAKS, EVEN TO ME."[citation needed]

When her symbol appeared on the Moon, it was assumed she had "died" and was no longer present in Redacre.[citation needed] The other Voices are unable to hear her name if it is spoken.[11]

According to THEE-I-DARE, the Voices stole the triple leg sign for CHASE-THE-SUN. Now that she has died, that part of the symbol is free.[12]

Have you had an interaction with Damaged Voice (CHASE-THE-SUN)? Consider sharing your experience here!

The Damaged Voice has responded to some players' rituals, heard as dreams when returning to the Hideout after successfully completing a mission.