From The Blackout Club Wiki
Jump to: navigation, search
Dax 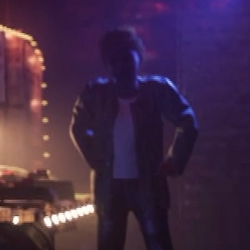 Daxton Raleigh[1], better known by his nickname, Dax, is a character in The Blackout Club (game).

Dax is a very intelligent individual, easily described as a "whiz kid" who is exceptionally skilled with gadgets and technology. He built the custom drone that steals the CHORUS Binder in Steal missions.[2] He seems eager to try out new things, including a supposed experimental robot arm he was developing with Bells.[citation needed] He seemed to have been extremely good friends with Bells and is friendly with Gwen as well.

In the Prologue, Dax is shown to remain firm in his belief that Bells is still alive but is somewhat hesitant to agree with Gwen about going on missions. As they leave, he is quick to reassure the player that they will return quickly.[3]

In the Prologue, Dax is seen with dark skin and short hair, wearing a white t-shirt, an army jacket, and punk jeans, as well as a pair of canvas high-tops.[4] On the game's logo, he is depicted in a a sweater over a collared shirt with the sleeves rolled up. He is also wearing jeans and a pair of glasses.

Prior to the start of the game, Dax had befriended Bells. During one of their times together, the two had been by the cliffside swings and heard a strange, "creepy" sound, coming from the cliffs. The two gathered climbing equipiment and proceeded to try and make their way down the cliff, with Dax almost falling at one point. Bells was able to catch him, and Dax told her that he owed her a "life debt." Upon reaching the bottom, the two found the entrance to a cave shaped like an armpit. Inside, Bells described "2 standing stones with holes cut through near the top and it made a shape, a round shape, and the wind would whistle through it and it would sound like that cry- that cry we had heard." The two never spoke of this discovery to anyone else, including Gwen, as "it seemed like it was evidence of much older people passing through the valley."[5]

Like the other kids in Redacre, Dax eventually started experiencing strange blackouts and began bonding with other kids going through the same ordeal, forming The Blackout Club. During this time, he became closer to Gwen and Bells.

During the Prologue, Dax can be seen In the Hideout discussing Bells' disappearance with Gwen. Gwen expresses concern over their friend's survival, but Dax assures her that they will find Bells. He leaves with Gwen to get more snacks after reassuring the New Kid that they will return soon.

Since then, Dax has figured out how disable the mines the enemies have begun to set up and much more.[citation needed] Despite his gifted abilities utilizing technology, he did not consider himself a nerd. Rather, he referred to himself as a "jock nerd".[6]

Dax isn't a fan of THEE-I-DARE, and blames him for Bells disappearing.[7] However, he seems fond of LAUGH-LAST, and believes he is sizing him up for hosting because he has been "messing with his dreams". Dax mentioned being able to overhear a prayer that a player sent to LAUGH-LAST.[8]

Although Dax does not directly interact with players - communicating instead as The Blackout Club HQ - players can interact with him and Gwen in missions.