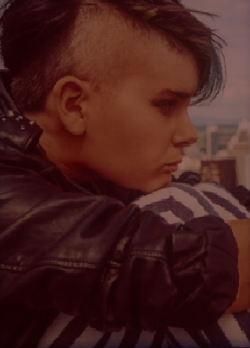 Devin Esposito is a character from The Blackout Club (game).

From their Journals, Devin appears to be quite close to their mother, enough to feel comfortable discussing how they identify as non-binary and the dysphoria in their life. Devin seems to struggle greatly with negative feelings and thoughts, calling themselves a "whole messy ball of negative stuff"[4] and blames themselves and their mental health struggles for their mother leaving.[1]

When speaking to their mother on the phone, Devin does not hesitate to speak their mind on their mom's strange behavior. They are willing to be patient and give their mom time to answer their questions.

They are highly skeptical of and frustrated by the events in the town and are "creeped out" by their younger sister Chiara.[4] Chiara is suspected to be a Lucid as hinted in Devin's diary and mentioned in a Player Interaction with SPEAK-AS-ONE.[4]

Despite their anger towards the Voices and thin patience, Devin still seems to care deeply for Bells and the other kids in Redacre.[2]

Sometime before the start of the game, Devin's mother left town, leaving Devin to live with their younger sister, Chiara, and their father, Alberto, in 918 Hoadly. During this time, Devin started noticing Chiara's strange behavior.[4]

At some point after their mother's disappearance, Devin was interviewed and prescribed medication, which they avoided taking. Devin attempted to "fake" the results. Devin started recording this all in their diary as well as transcribing conversations with their mother over the phone.

Devin befriended Bells, who they referred to as an "angry girl." They presumably discussed various personal topics, including gender identity/dysphoria and taking medication, as well as the events going on in Redacre.[5]

Their journals and texts can be found by collecting enough Bonus Evidence during missions. Devin is referred to as the person who transformed Maligras Quiroga's campaign signs into the recruitment signs during a blackout, implying their association with the Blackout Club.

Devin was contacted by the Unknown Caller like other members of the Blackout Club were, before his disappearance when HUNT-THE-STRONG consumed DANCE-FOR-US.[citation needed]

In early May 2020, The Blackout Club (HQ) stated that Devin had not been heard from for quite some time. A voicemail was left that said, "DONE WITH VOICES YET? YOU WILL BE".[7] Shortly after, A group of players received a text message from HQ. They complained about The Voices, how we were just audience members in their drama, and said they didn't care if another one got eaten by HUNT-THE-STRONG. They angrily urged them to send prayers to The Voices, asking "where the fuck Bells is." Whoever was texting refused to identify themselves, only saying that they were an angry little ant.[8] It was assumed this rogue agent of HQ could be Devin, given the contents of the voicemail. After expressing concern over Devin's whereabouts, club members received messages from another anonymous sender, later revealed to be Dead Skeptic, that read, "Your friend isn't missing. They just...woke up. Don't worry about them. Worry about Them"[9] which was believed to be a warning against the Voices.

SPEAK-AS-ONE confirmed that Devin was no longer in their care. Devin was in a safe location when The Song grew faint. Suddenly, the cameras went dark, and they were gone. SAO believed they had help because it happened too quickly, given each camera's angle and distance. SPEAK-AS-ONE fears for them, as HUNT-THE-STRONG can smell Devin's anger towards the Voices.[10] While it is unknown which Voice Devin follows[11], they have said HUNT-THE-STRONG has attempted to sway them due to their anger towards the Voices.[citation needed]

In late May, HQ heard rumors that Devin was alive and forming their own club.[12] THEE-I-DARE confirmed that Devin had left the Blackout Club and was working with adults.[13]

Devin worked on finding recruits for Dead Skeptic, encouraging others to renounce the Voices and refusing to give out their name and confirm who they were. They expressed frustration that it was difficult due to Gwen and Dax "turning everyone into Voice groupies." Upon hearing that Bells made a reappearance, they said they would reach out to Gwen and Dax to confirm, despite their "no contact rule".[14] Devin believed that Bells deserved better than to become a "ventriloquist dummy".[2]

Devin reached out to the Blackout Club again, searching for other children who had renounced all the Voices. They say the Hunter can’t hear them because they renounced him and the other Voices. It is harder for the Voices to listen in on a child who renounced them, as long as they mean it and swear the Voices off entirely. They said they had a project that the Voices couldn't know about, and they needed kids who renounced them so they couldn't be listened in on.[15]

Devin is currently under the care of the Dead Skeptic group, where they are considered a junior member.[citation needed] Devin is searching for passwords given by the Unknown Caller to certain members of the Blackout Club to get into the files on his computer. They believe the Unknown Caller knows where their mother is and is currently in his RV looking through his files.[citation needed] After hearing about the Unknown Caller’s pleas to “find the names”, Devin offers to use the Dead Skeptic database to help, if the club can find specific names to look up.[16]

THEE-I-DARE found Devin’s contact information in Lenka Staneck's phone, discovering that the two had been in contact regularly. THEE-I-DARE suggested that the Club pray to him with messages for Devin, which he would pass on while pretending to be Staneck.[17] THEE-I-DARE knew Devin would be distrustful if they suspected his involvement.[18] Devin was suspicious of the messages, describing them as "creepy" and asking, "did you steal a mental patients phone."[19] While they were surprised Staneck was able to text in her current state, Devin also thought she was bad at texting after reading the messages sent by THEE-I-DARE.[20]

Have you had an interaction with Devin Esposito? Consider sharing your experience here!