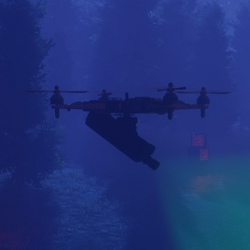 The Enemy Drone is an environmental hazard found in missions.

Enemy Drones are drones deployed by the enemy and have a Security Camera attached to it. They move in a randomly generated path and can be found both on the surface and in the Maze.

Enemy Drones can safely be avoided as long as one stays out of it's light. Like the Security Camera, the Enemy Drone has three modes to it:

Throwing a Foam Grenade at the drone will temporarily disable the camera, but it will not cause the drone to fall out of the sky. If one has the Hacker Major Power's third upgrade, Off the Grid, players can use it to temporarily disarm the drone's security camera, allowing for safe passage. When disabled, a timer will appear by the drone to denote the time until it will be active again.