Lower East Hoadly is one of the areas available in Redacre for selection in the selection map. It is only area available at the start of the game until reaching Level 4. 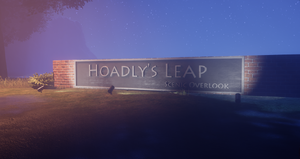 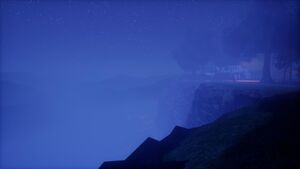 This is the first section of map available to players. Lower East Hoadly spans from the precipice to 98th Avenue to bisects East and Lower West Hoadly. Up the cliffs behind the even-numbered houses is Old Growth (Region). This section of the map contains houses #918 through #922. There are unique landmarks in this part of the map such as: a statue of a deer and a tree house. There are several Animal Control trucks parked out on the road. 98th Avenue intersects Hoadly's Leap and split Lower East Hoadly and Lower West Hoadly.

At the end of Lower East Hoadly there lies one of Redacre's most scenic locations, Hoadly's Leap, a cliff side that overlooks a brilliant view. Supposedly the view was named after the historical suicide of a local pastor, though residents have expressed doubt of it having actually ever happened.

There are two main spawn and exit caves available in this region of Redacre as well as two additional spawn locations.

The Blackout Club Wiki has a collection of images and media related to Lower East Hoadly. Please visit the gallery page to see additional images, media, and to add your own to the collection.