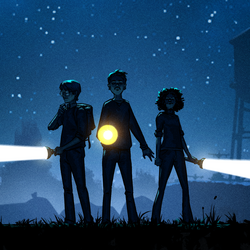 The Blackout Club is a group of teens in Redacre who have banded and bonded together after experiencing strange blackouts. 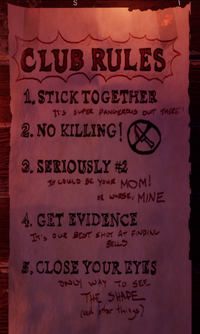 The Blackout Club consists of many teens and some tweens from around Redacre who have come together to solve the town's mystery and what's happening to its residents. There are various club members all scattered about Redacre who work together to complete missions that sabotage the efforts of the darker entity that lurks in the town. Their ages range from preteen to teen age. Some of the club members have formally run away from their homes and family, as the adults of Redacre are under the control of a darker entity and it is unsafe for them to live with their families as they could easily be kidnapped. Some others still live with their families, but have to remain extremely careful doing so, as seen in the case of Bells, who still lived at home and was consequently kidnapped because of it. New Recruits are taken to the hideout via blindfold, to keep the hideout hidden from enemies and to test new recruits. They seem at odds with CHORUS Communities , whom they consider to be the ones responsible for the crazy events in town.

At first, the Blackout Club simply was a club for the kids to bond over their strange blackouts, but after Bells was captured by the cult beneath their feet, the members swore to find out what happened to her, finally mobilizing as an organization. Gwen and Dax both seem to be acting leaders of the club. Their main base of operations is the Hideout, though it is implied that there are many more hideouts all around Redacre. The Blackout Club post recruitment posters and propaganda around their town to seek out other kids to join their cause and expand their numbers, if not replace them when they're killed or captured.

The Blackout Club have agents doing different things and jobs such as: couriers, rescuers, saboteurs, thieves, and more. In order to stand a chance against the brainwashed adults who are much stronger and larger than them, most teams work in a unit of four, though some teams may contain less. Since most of the town's mayhem happens at night, the club also mostly gathers and operates at night. There are many dangers to working in the club, as many times, members can be killed in the field and found dead in rescue missions.

All members have ties to the Voices, or what they call the Voices, which inhabit their dreams and often talk to them while out on dreams. It is said these voices were the ones who snapped the kids out of the sleepwalking trance. Some club members have begun making offerings and sacrifices to Voices of their choice. Despite being part of the club, sometimes the kids still 'blackout' during the night and control of their body may fall prey to a Voice who inhabits that club member's dreams. According to a note on the Hide the Evidence mission, where a particular incident of a club member blacking out and murdering several doves during their episode, the blackouts have been getting much worse, so much so that club members now sleep in shifts with someone watching over others while they sleep to keep them from doing crazy things. Due to most of their missions taking place at night, club members usually sleep during the day.

According to some notes left about, there are some kids who have turned traitor to the Blackout Club and there was a specific kid who had apparently been partially responsible for the capture of Bells, tracking her and taking pictures of her misdeeds. Gwen suspects that the traitors could be double agents or kids who have fully turned traitor. Some are captured and interrogated by the club[1].

In the 90s, there was a version of The Blackout Club, though their actions and fates are largely unknown. Some survived and are parents in Redacre now.[2] Lucids will sometimes remark that they grew up in Redacre.[3]

There are five main rules in The Blackout Club.