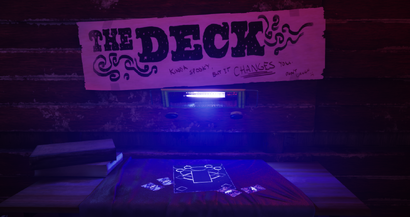 The Deck is the perk system available in The Blackout Club (game).

The Deck is located on a table within the Hideout. At the table, players can equip a major power, minor powers, and see their current XP amount and XP needed to attain the next level. Upgrades must be acquired in the order shown using power points. One point is earned each time the player reaches a new XP level. It takes 15 power points to max out the Drone, Hacker, and Unstoppable major powers. Takedown requires only 10 power points because it lacks a fifth card. Minor powers can be acquired using 1 or 2 power points depending on the power.

According to THEE-I-DARE, humans created the Deck. He says The Voices inspire us in dreams. The effects are caused by the power of belief.[1]

Select a card to learn more about the Major Power and its upgrades.

Minor Powers are lesser perks that can be equipped independent of Major Powers that enhance the player's abilities or benefit them in missions. Select a minor power to learn more.